The International Alajos Kálmán Prize is awarded to an individual researcher, in recognition for outstanding scientific contributions, in the field of structural sciences, within the last 5-10 years. The Prize was established by the Hungarian Chemical Society, and is endorsed by the European Crystallographic Association. It is awarded twice, in a three-year cycle, at the ECMs. The selection of the awardee is conducted by ECA SIG13, although the recognised field is wider, including all structural sciences. The prize consists of a medal and a financial award, as well as the awardee delivers a Prize Lecture at the ECM.

The awardee of the International 1st Alajos Kálmán Prize is 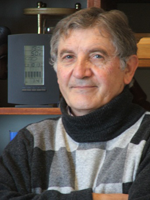 for his outstanding activity in supramolecular chemistry,
revealing aspects of thermodynamics, kinetics and separation of inclusion compounds,
and discovering the relevance of certain weak bonds in significant industrial processes.