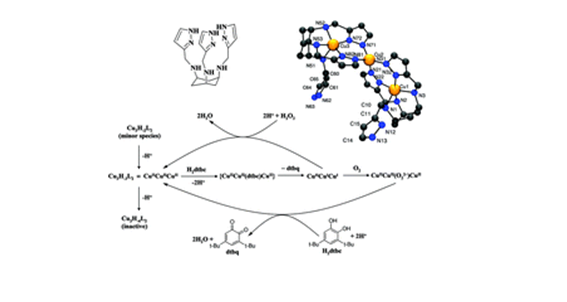 Copper(II) complexes of a polydentate tripodal ligand L × 3HCl (L = N,N’,N’’-tris(5-pyrazolylmethyl)-cis,
cis-1,3,5-triaminocyclohexane) were characterized in both solution and solid states. Combined evaluation
of potentiometric, UV-VIS, and EPR data indicated the formation of two mononuclear (CuHL, CuL) and
three trinuclear (Cu3H−xL2, x = 2, 3, 4) complexes. The high stability and spectroscopic properties of the
CuL species indicate a coordination of two pyrazole rings in addition to the three secondary amino groups
of L in a square pyramidal geometry. In parallel with the formation of trinuclear species, intense charge
transfer bands appear at around 400–500 nm, which indicate the formation of pyrazolate-bridged complexes.
The crystal structure of [Cu3H−4L2](ClO4)2·5H2O (1) reveals the formation of a unique trinuclear
complex that features a tetra(pyrazolate)-bridged linear tricopper(II) core. The Cu⋯Cu interatomic distances
are around 3.8 Å. The two peripheral copper(II) ions have a slightly distorted square pyramidal geometry.
The four pyrazole rings bound to the peripheral copper(II) ions are deprotonated and create a flattened
tetrahedral environment for the central copper(II), i.e. the formation of the trinuclear complexes is under the
allosteric control of the two peripheral copper(II) ions. The triply deprotonated trinuclear complex is an
efficient catechol oxidase mimic with a surprisingly low pH optimum at pH = 5.6. Since the mononuclear
CuL species is not able to promote the oxidation of 3,5-di-tert-butylcatechol, we assume that the central
copper(II) ion of the trinuclear complex with an unsaturated coordination sphere has a fundamental role in
the binding and oxidation of the substrate. The experimental and structural details were further elaborated
by a series of hybrid density functional theory calculations that support the presence of an antiferromagnetically
coupled ground state. However, the magnitude and the pattern of spin coupling are dependent on
the composition of the functionals. The optimized theoretical structures highlight the role of the crystal
packing effects in inducing asymmetry between the two peripheral copper(II) sites.