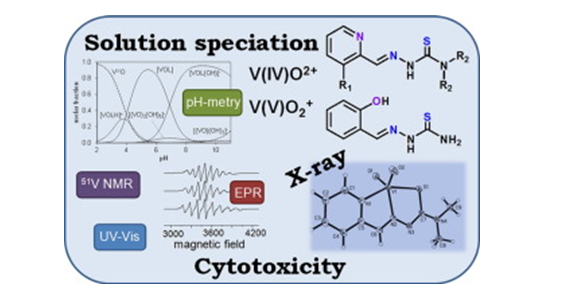 The stoichiometry and thermodynamic stability of vanadium(IV/V) complexes of Triapine and two related α(N)-heterocyclic thiosemicarbazones (TSCs) with potential antitumor activity have been determined by pH-potentiometry, EPR and 51V NMR spectroscopy in 30% (w/w) dimethyl sulfoxide/water solvent mixtures. In all cases, mono-ligand complexes in different protonation states were identified. Dimethylation of the terminal amino group resulted in the formation of vanadium(IV/V) complexes with considerably higher stability. Three of the most stable complexes were also synthesized in solid state and comprehensively characterized. The biological evaluation of the synthesized vanadium complexes in comparison to the metal-free ligands in different human cancer cell lines revealed only minimal influence of the metal ion. Thus, in addition the coordination ability of salicylaldehyde thiosemicarbazone (STSC) to vanadium(IV/V) ions was investigated. The exchange of the pyridine nitrogen of the α(N)-heterocyclic TSCs to a phenolate oxygen in STSC significantly increased the stability of the complexes in solution. Finally, this also resulted in increased cytotoxicity activity of a vanadium(V) complex of STSC compared to the metal-free ligand.